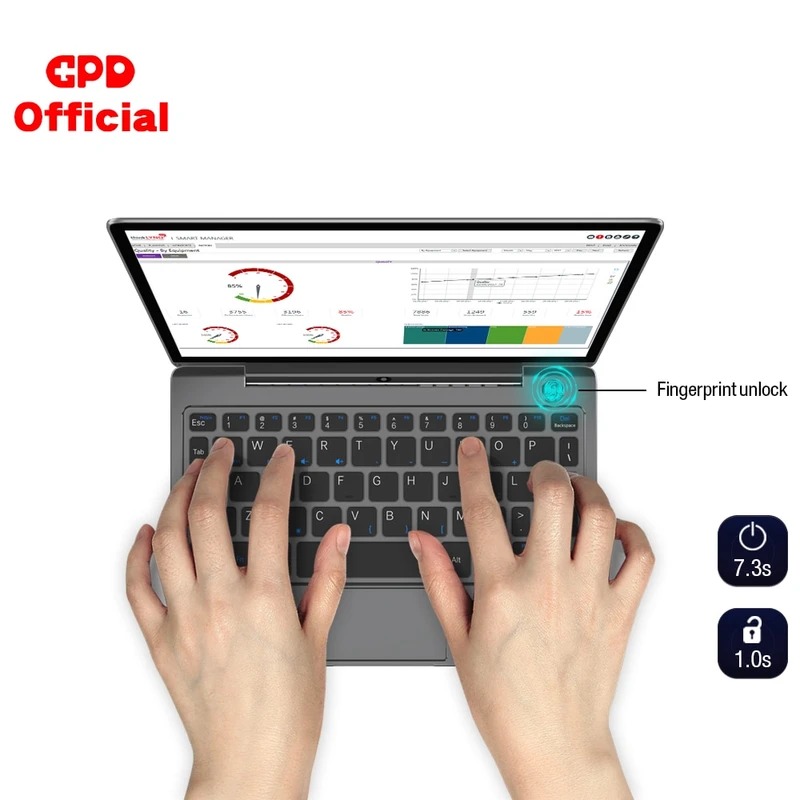 FREE SHIPPING WORLDWIDE Buy Now 66% Discount On P2 Max 2 Pocket Laptop GPD P2 Max is the world's smallest Ultrabook It is the same as the iPad at Shop For Gamers.

1.With only a size of iPad mini 4 and only 650g net weight, about 50% lighter than the mainstream Ultrabook.

It has an 8.9-inch screen and supports touch control and stylus input

You can fit an 8.9-inch screen into an 8-inch body, which owes to the InfinityEdge design. With a screen proportion of 80.9%, it provides a larger screen visual area, bringing broad vision, making you more concentrate on work and entertainment! Meanwhile, the screen is based on 10-point touch control, supports finger touch screen input and stylus input!

What is more, it is the only Ultrabook with a density of 340ppi pixel. High display density brings ultra-high simulation and rich graphic details so that your retina can not distinguish any pixel.

GPD P2 Max also supports fingerprint unlock.
It takes only about 1second to brighten the en and unlock.

It only takes 10 seconds to download a 1GB movie.

P2 Max has a built-in 2.4g /5G dual-band Wi-fi chip. With a dual-channel maximum transmission rate of 867Mbps and a download speed of nearly 108MB/s, it only takes 10 seconds to download a 1GB movie. It has built-in Bluetooth 4.2, compatible with Bluetooth 4.1, supports IPv6 connection option, making data transfer faster.

It can play local 1080P video continuously for 8 hours.

Endurance is the strength of GPD P2 Max. With about 9200mAh, 35Wh high-capacity polymer lithium batteries and 600Wh/L energy density, which means the long battery life, it can play local 1080P video for 8 hours continuously, giving you a sense of security from morning till night!

​Based on quick charge technology of PD 2.0, the 30W output power adapter can bring GPD P2 Max back to life at any time. Support any mobile phone charger and mobile power bank.

Whether you're traveling or not, turn on your Microsoft Office OneNote to record your inspirations, track them, take notes, edit web content, or customize your to-do list!

Buy the most popular best choice products at the lowest price. Glasses, tools, backpacks, protectors, bracelets, etc. Check out our collection now and get the best discount from us.